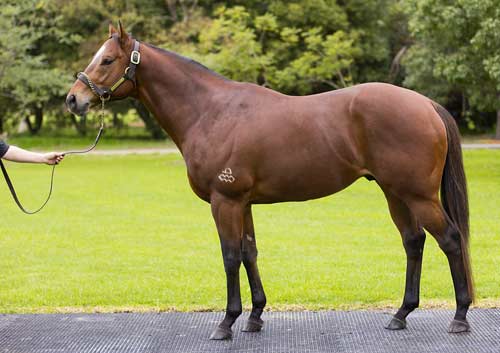 Oakland Park homebred Roganella has issued a strong challenge to the Bob Peters bandwagon ahead of the G2 WA Guineas (1600m) on November 25.

Roganella looked a genuine candidate for the classic when he box-seated and then burst clear for a three-length victory in the Express Interior Design Hcp (1600m) on Saturday.

The son of Oakland Park sire Rogano (pictured) had been placed at all three starts since a winter spell before stepping up to a mile.  “He’s still maturing and learning the craft,” trainer Dan Morton said.  “His owner Neville Duncan looked at the program a couple of months ago and identified this race instead of the Fairetha Stakes as the best lead-up to the WA Guineas.”

Roganella has firmed into $9 for this year’s edition and jockey Chris Parnham admitted he felt like the winner a long way from home on Saturday.  “He’s got ability and the blinkers helped.  He travelled strongly behind the leader and, when I pushed out, he powered through the line.”

His dam Zanella (Ihtiram) won a LR Jungle Dawn Classic for Harvey-based trainer Johnny McGuckin before going to stud.  She is a half-sister to LR December Hcp winner Homesville Lass (Higginsville) and her latest foal is a yearling colt by Ouqba (GB).

Rogano (Redoute’s Choice) is a full-brother to Not A Single Doubt and won his first two starts at Canterbury.  He was sidelined for 12 months before returning for a first-up victory at Hawkesbury in his second and final campaign for Arrowfield Stud.

Quick back up works a treat for Not To Be Mist

Two for two for Sessions’ 3YO Timely Outburst

Another Oakland Park bred 2YO winner